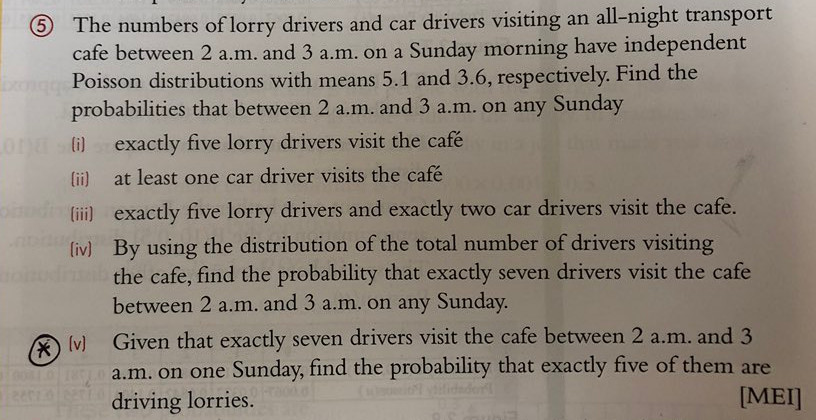 But if we think about what’s going on a little further, we will be able to understand the structure of this problem more and see further connections.

The first thing to do to make our life a little simpler is to replace the specific numbers 5.1 and 3.6 with variables, so that the algebraic structure becomes clearer. So let’s call the means of the two independent Poisson distributions $\lambda$ and $\mu$. We will stick with the 5 and 7 for the time being, and generalise those later.

If we had assumed that the probability that a visiting driver picked at random is a lorry driver is $\frac{\lambda}{\lambda+\mu}$, then we would have got the same answer without having to calculate any Poisson probabilities at all.

This seems like a reasonable suggestion, but how can we justify it?

One technical way is to say that the binomial probabilities we have found above prove that this is the case. But this gives little insight into the reason for it.

A more careful way of doing this is to think about the behaviour and meaning of Poisson distibutions. The means $\lambda$ and $\mu$ are for the unit time period of 1 hour. If we had a time period of $t$ hours, with the same uniform random driver arrivals over the whole period, then the mean number of lorry and car drivers would be $t\lambda$ and $t\mu$ respectively, with the distribution of the number of drivers still being Poisson. A standard thing to do at this point is to take $t$ to be very small. In this case, the probability of there being more than one driver arriving in the period is negligible, so the probabilities become:

Therefore, in this very short time period of $t$ hours, we have

This means that whenever a driver arrives, the probability that this driver is a lorry driver is indeed $\frac{\lambda}{\lambda+\mu}$, exactly as we wanted.

Incidentally, the small-time-slice thinking also shows why the Poisson distribution is a good approximation to the binomial distribution: imagine we are dealing with a time interval and our Poisson distribution has mean $\lambda$. Divide the whole time interval into $N$ equal slices, and assume that no slices can have more than one event. Then each slice has a probability of $\lambda/N$ of having an event, and the number of events is distributed as $\mathrm{B}(N,\lambda/N)$. The larger $N$ is, the better the assumption that no slice can have more than one event becomes, and so the more closely $\mathrm{B}(N,\lambda/N)$ approximates $\mathrm{Po}(\lambda)$.

This also reminds me of a lovely and surprising probability question on this topic that I saw on an undergraduate problem set (question 6(ii) on Examples sheet 2 here):